The Max Planck Institute for Comparative and International Private Law organized a conference on international private law in China and Europe, which was supported by the Deutsche Forschungsgemeinschaft and the Hamburgische Wissenschaftliche Stiftung. It was initiated by China Law Unit research fellow PD Dr. Benjamin Pissler, M.A. (Sinology), hosted by Prof. Dr. Dr. h.c. mult. Jürgen Basedow, LL.M. (Harvard), and took place at the Institute in Hamburg on 7 and 8 June 2013.

New private international law (PIL) legislation enacted in the two Chinese jurisdictions – namely, mainland China and Taiwan – has adopted terminology and a structure that is oriented on continental European conceptions, often on German approaches. Moreover, the new legislation makes apparent the two jurisdictions’ increasing integration into the global economy. This is particularly relevant for legal problems that arise in business activities and require PIL for their solution. The sale of goods and personal relationships find themselves woven together at an international level and issues that arise include: Which court has jurisdiction over a given dispute? Whose law is applicable? Are judgments and decisions reached before the courts of one country enforceable in another? 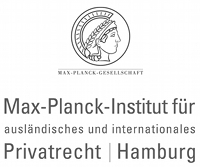